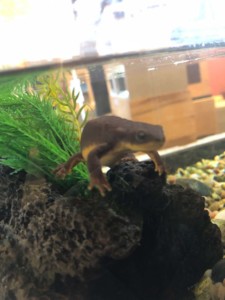 This is Cleese, Wonderlab’s Rough Skinned Newt, lounging in his habitat. Photo by Layne Sermersheim. 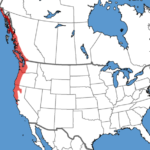 This map highlights where in the world you can find the Rough Skinned Newts talked about in this article: the Pacific Northwest Coast, from southeastern Alaska to the Bay Area of California.

Cleese is an amphibian that lives in forested lakes and ponds along the Pacific Northwest Coast, from southeastern Alaska to the Bay Area of California ). Amphibians are animals that live some of their life on land and some of their life in the water. In their natural habitat, these newts like to eat small spiders, insects, and worms. At WonderLab we feed Cleese bloodworms, which are small, red worms. In the wild, these newts do not have many predators, mainly because they are poisonous. This means that if Cleese is eaten by something, he can make them get sick or even die. This is different from venomous animals (like snakes), which means they have to sting or bite you in order to inject the venom.

The poison that the rough-skinned newt produces is called tetrodotoxin. This toxin is released from his body when he feels threatened by a predator, mainly the garter snakes living in the Pacific Northwest alongside these newts. There are only two specific populations of garter snakes that have the ability to live with and eat these newts and they are called the Puget Sound Garter snake, Thamnophis sirtalis pickeringii , and the Valley Garter snake, Thamnophis sirtalis fitchi. They are resistant because the snakes and the newts have interacted with each other for a very long time and so have adapted, or changed, in response to each other. 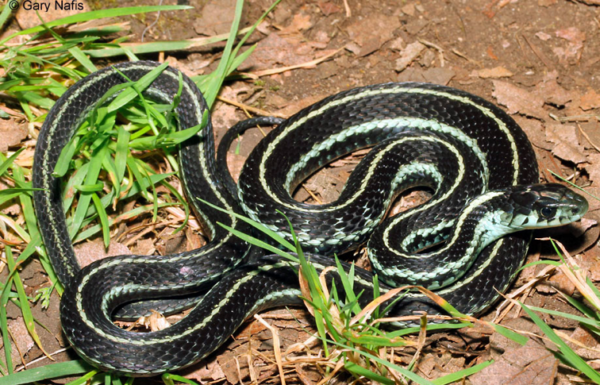 This is a Puget Sound Garter snake, Thamnophis sirtalis pickeringii. 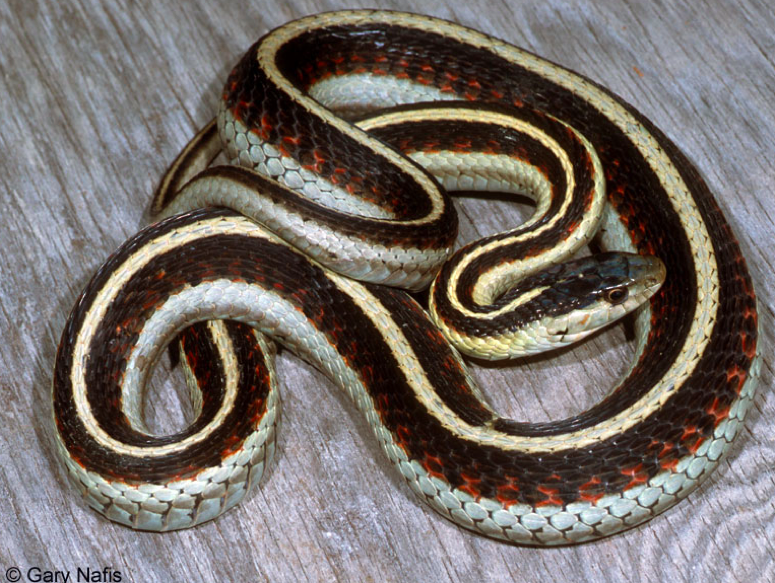 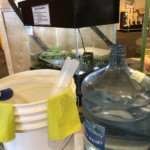 This is a picture of Cleese’s habitat. This bucket, scraper, siphon, and gloves are used ONLY on Cleese so as not to spread tetrodotoxin. The water jug is filled with specially treated water that gets put only in Cleese’s habitat. Photo by Layne Sermersheim.

When a garter snake eats a newt and dies because of the toxin, it leaves other garter snakes that are more resistant to the newt’s toxin. These resistant snakes are then left to make more resistant snakes. As the newts’ toxin gets stronger, the garter snakes’ immunity needs to be stronger as well. This cycle of weak snakes dying and newt toxin getting stronger then snakes getting more resistant has continued for thousands of years and has come to be known as the Red Queen Hypothesis. This is the idea that the evolution of two species can be influenced by their relationship to one another, or they can coevolve.

Although Cleese does not live with a garter snake in his habitat, he still has the ability to produce tetrodotoxin. Because of this, animal care interns like myself take extra caution when cleaning out his tank and changing his water. When I deep clean his tank, I use kitchen gloves to protect me from the toxin and it is very important for me to keep any materials that have been exposed to his water separated from other animal care materials. Because of this, Cleese has his own set of cleaning materials that do not get used on any other habitat and we have to use bleach to clean anything that comes in contact with him or his water. 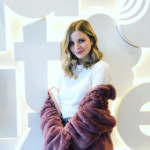 About the Author: Layne Sermersheim worked as a WonderLab Animal Care Intern during the 2018-2019 school year. She is currently a Junior at Indiana University studying Animal Behavior. Originally from Jasper, Indiana, about an hour and fifteen minutes from Bloomington, Layne spends her free time going to new restaurants with friends and enjoying time outside at Griffy Lake. At WonderLab she specifically takes care of Snow the corn snake, the ants, Dot the bearded dragon, and Cleese the newt.