The Bustling World of Beetles

The Bustling World of Beetles 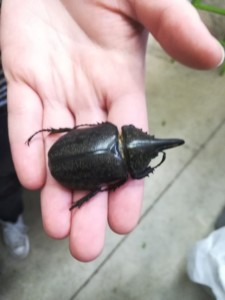 Beetles are pretty awesome insects. They can be found in gardens and forests all over the world and come in all sorts of shapes and sizes. In fact, there’s probably a beetle living somewhere close to you, since some species of beetle are native to Indiana. WonderLab recently welcomed Hercules the Eastern Hercules Beetle also known by its scientific name the Dynastes tityus to the museum. He was given to WonderLab in September by a Bloomington local who found him on his property. We were delighted to have him. We named him Hercules, aka Herc.

Eastern Hercules Beetles usually live 3-6 months once they reach their adult form, so it wasn’t much of a shock when Herc died recently, but he will still be missed. Herc was an example of the diverse types of life that can be found in an Indiana backyard. Watching him every day made me curious about the life of beetles everywhere. In his honor, here are some special beetle facts.

You might know that caterpillars turn into butterflies through a process called metamorphosis. Well, beetles go through it too.

Metamorphosis is a process by which animals undergo extreme physical changes some time after birth or being hatched. Metamorphosis includes four life stages- egg, larvae, pupae and adult. It’s one of those things in nature that seems almost magical.

Beetles begin as wriggling, white or grey worm like creatures also known as grubs that are born from eggs and live underground. They’re not the most beautiful looking, but their sharp mouthparts are perfect for munching away at their main source of nutrition- rotten wood. These eggs are laid underground in batches of 100 eggs in spots with enough food to sustain them after hatching.

Grubs from the Hercules Beetle (Dynastes hercules) species of beetle can grow big enough to fill the palm of a hand. Eastern Hercules Beetles are much smaller, but their adult form can reach a respectable 2.4 inches in length.

Fact #3: Beetles build cocoons from soil and their own poop.

Eastern Hercules Beetles, like the one we had at the museum, enter the pupal stage about 6 months to 1 year after they hatch. The pupae looks a lot like an alien creature or a really big shiny raisin. Adults emerge from the pupae after a few weeks, but stay underground until it’s warm outside. Apparently, beetles don’t like to leave their cozy beds and homes in the winter either!

Despite their large size, Hercules Beetles use their hind wings which are hidden under their hardened front wings.  These hind wings are known as elytra.

Male Hercules beetles use their horns to fight for females. It’s almost like a wrestling match when two males fight, trying to lift one another off the ground and slam their opponents into the dirt. They also have the ability to toss fellow beetles off of tree trunks to claim control of the food in the area. Speaking of food, adult beetles eat fresh and rotting fruit and tree bark. Yum. 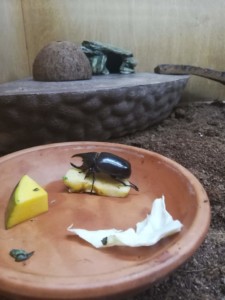 Eastern Hercules Beetle on an apple at WonderLab. Photo by Niha Alaspuri

During his short time at the Museum Herc really appeared to enjoy eating apples and could be seen sitting atop his meals most days.

Fact #7:  Beetles live under rotting wood and on trees.

Eastern Hercules Beetles can be found in eastern and southeastern parts of the United States, usually sitting around on ash trees or under a rotting log.

It’s not just Eastern Hercules beetles that have cool abilities though, here are some quick facts about the amazing things other kinds of beetles can do.

So many cool little bugs, each with their own unique adaptations and thriving lives. Imagine how many creatures are going about their lives, finding food and raising families, right underneath our feet. We were lucky to have Herc with us for a short part of his life, and I will always remember him fondly. Thanks for all the laughs, little guy.

Metamorphosis and life stages of beetles

About the author: Niha Alasapuri is a sophomore majoring in journalism with a concentration in public relations at Indiana University. Her hobbies include getting chased by the campus squirrels and writing sappy poetry. She is currently a marketing intern at WonderLab, where she learns a lot of cool science stuff while writing about the exhibits. She hopes to befriend the resident reptiles at the museum by hovering around them at regular intervals, which also happens to be a surprisingly good strategy for making human friends.